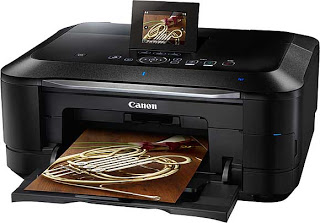 Canon Pixma MG8220 printer is the latest high-end product from the manufacturer that offers incredible photo print quality compared to other wireless Inkjet printers in its arena. Although it poses close resemblance to its siblings such as Canon Pixma MG6220 that’s estimated to cost between $150 and $250, Canon Pixma MG8220 wireless printer comes with a new capability that enables it to scan 35mm slides and strips of film. On top of that, it boasts of being the manufacturer’s latest high-end printer capable of producing brilliant photo quality prints from different sources without necessarily connecting to a computer. The new Canon Pixma MG8220 comes as a replacement to its outgoing though still available MG8120 sibling offering new functionalities such as copy, print or scans; the scan feature is further enhanced to include 35mm film.

The copy feature is also enhanced to allow users print photos directly from the film; in addition, Canon Pixma MG8220 allows users to print photo images from various locations such as USB memory keys, PictBridge cameras and memory cards with or without connecting to a computer. Users can also utilize the copy feature to perform standard photo copy functions or advanced photo copy which is know to produce high quality prints; the standard photo copy function also lets users print documents with reasonable print quality. Canon Pixma MG8220 is convenient for sharing photos to online albums such as Picasa web albums and Canon image gateway that’s accessible from its front panel so you don’t worry in absence of a computer; however, incase you prefer connecting to a computer, you can still perform all these functions such as printing photos or just sharing them online. Canon Pixma MG8220 houses a 3.5inch LCD display panel that lets users preview photos before printing or sharing them online.
Other flourished additions include the capability to print both page sides on a single instance commonly referred to as duplexing. The printer can as well create beautiful prints on printable optical drives without experiencing any hiccups and for those who are time conscious, Canon Pixma MG8220 allows two 150 sheet paper trays essentially to load both plain paper and photo loaded at a single instance. On the down side of this printer, it lacks fax support or an automatic document feeder rendering it only suitable for home light duty functions.
Canon Pixma MG8220 Features/Specifications;
Canon Pixma MG8220 Price in Kenya: $300
Previous articleSafaricom’s Vodafone VF555 Blue Facebook Handset
Next articleBrother MFC-J430w Wireless Inkjet Printer

Huawei has recorded impressive results in the first quarter of 2020 according to statistics from the international data corporation (IDC). The tech...
Read more
Business

How Safaricom customers can buy local digital newspapers for only Ksh20

Safaricom and local media houses have inked a deal that will see customers on the Safaricom network purchase local newspaper issue at...
Read more