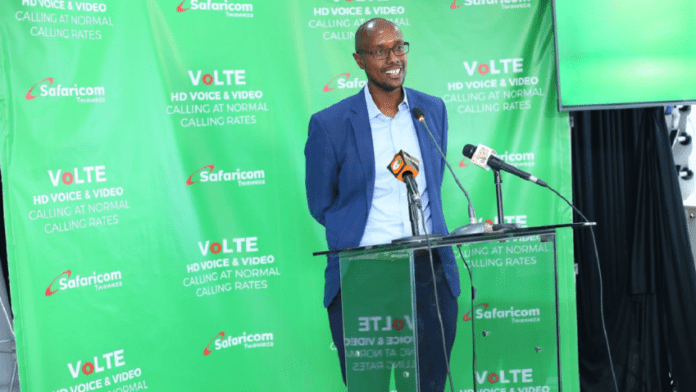 Kenyan telco giant – Safaricom has activated VOLTE voice and video calls for subscribers on its network enabling them make clearer high definition calls over its network. VOLTE is a feature that requires telco operators support a higher data capacity as compared to overtaken 3G and 2G networks. Unlike previous technologies, 4G has the ability to carry up to three times more data per call thereby providing a clearer and richer experience. In essence, VOLTE eliminates noise such as background noise as well as other forms of interference that are particularly common with older technologies.

The service is already available countrywide to any Kenyan with a 4G capable device that has VOLTE functionality on top of a 4G equipped Sim card from the telco and comes at no additional charge. Subscribers with capable devices are set to experience high definition voice quality rated at three times better than 3G and six times better than 2G.

Those who have select capable devices will be able to access 4G internet while utilizing VoLTE functionality to make calls simultaneously without having to switch in between the two. In comparison with older technologies such as 3G which carries both data and voice traffic on the same channel thus resulting in slower speed, subscribers using 4G technology will be able to have both functionalities at the same time without compromising on browsing speed.

VoLTE also allows subscribers switch between voice and video calls during a VoLTE call, though video calls can only be possible if both the caller’s and receiver’s handsets support the technology.

Speaking on the development, Safaricom’s, Chief Customer Officer, Sylvia Mulinge said the telco was proud to lead in unveiling latest calling technology to its subscribers across the country. She also acknowledged how VoLTE will empower subscribers to better connect with families, friends and at work with high-quality video calling at no extra cost.

By unveiling VoLTE functionality to its customers, Safaricom is hopping to meet the ever rising demand for video calling functionality driven by data and smartphone usage. And as expected, businesses as expected to take the opportunity in making crucial conference or group calls over mobile devices. These opportunities range from just company communications to video marketing and trading specially on mobile devices. The telco is said to have committed its resources on 4G network expansion across the country and expects to double its base stations by the end of the year. Complementing the launch of VoLTE, Safaricom unveiled a range of supported mobile phones ranging from the Neon Ray retailing at KES 3,999 and the Neon Nova at KES 5,999. Other VoLTE supported devices select Samsung, Nokia, Tecno, Itel and Huawei devices. Customers using these devices may need to update their device software to

Huawei has recorded impressive results in the first quarter of 2020 according to statistics from the international data corporation (IDC). The tech...
Read more
How To

Gotv is one of the top pay tv service providers in Kenya with some interesting channels on offer including sports, news, children...
Read more
Business